Two photo sets from 2017 - more experiments than fully realized ideas. My old Canon 500D broke during the shoot for "Tethered Princess" and "The Girl with the Scrapped Barcode Tattoo" was the first shoot with my Sony A6300. The tattoo sheet didn't stick on the make-up, the costume fell apart, it was a wonderful day for everyone.

Having only few pictures to work with inspired me to cover the holes with small stories. Those story bits eventually became the Intravenus Project. I was able to write both of them into the continuity later, The Girl with the Scrapped Barcode Tattoo did only get a small part and is largely forgotten. The Tethered Princess is one of the many souls lost in Core 4 of the Project Network and might be part of the main story again at a later time.

Scroll all the way down - Download links under the stories!

The woman waited patiently as the assembly of assistants, researches and technicians was finishing their work on her. Measuring vitals. Getting blood and tissue samples. Finally one of the researchers adressed her directly. “I think we can all agree that you are human being.” She nodded quietly.  “Yes, predominantly.”

“My father is a King of the Machines and my mother is a Queen of Mankind, so I am…”

“A thethered princess?” The researcher pointed to the pile of tubes and cables the engineers just removed from the woman’s body. The woman nodded quietly. “Works for me. So, Princess. What do you remember about the last few hours?”

“I was to bridge the gap. Between humans and machines. I remember hesitation. I wondered what it would feel like. Opening up to the machine. Letting it penetrate my body.”

“But you… accepted the connection?”

“I did. I welcomed it. And then I just shut down.”

“This is where your memory blanks out?”

“No, this is where I was invited into the realm of the machines. And when I came to my flesh, my transformation was complete. I had become the Avatar of Progress.”

“I became at ease with my wired body, trying different setups to do the transfer. Some simple, some complex. Before I decided to leave one last time. For good.”

“I asked the bridge to take good care of my body while I was gone. Then everything just… fell apart. I came by to the sound of the door being forced open. Then you people came up to me and started unplugging me from the bridge.

Was that the bridge protecting me? Was I in danger?”

The supervisor of the recovery unit turned to one of the lab coats wrapping up the site of the incident.

“Doctor Nagy, please give the participant a suit and lead her back to her quarters. She’s the last one and it’s getting late.”

The woman in the lab coat helped the Princess getting dressed and started to leave the site. “Is the whole group like this? What in the heavens went down in Core 4?”

“You tell me. Exotek-induced Dissociative Disorders are your area of expertise. Maybe you are going to lead your own research team very soon.”

“Thanks, but no thanks. I’m a therapist, not crisis PR.”

“I wouldn’t worry too much about this. They all knew the risks. Whatever happens in Core 4, stays in Core 4”.

--- THE GIRL WITH THE SCRAPPED BARCODE TATTOO ---

The new participant of the project entered the automated chambers. Following the instructions handed to her after she finished the paperwork, she had already stored her clothes in the changing room. A light started to fill the room and she could barely see a thing. After a few seconds she could the feel the sharp tingle of the mechanical arms etching codes and numbers into her skin.

As the chamber machinery got to work on her legs the lights suddenly switched off. She could hear the the voice of one of the engineers apologizing to her and asking her to step out for manual processing. Looking in one of the mirrors in the changing room she saw what the engineers meant - the barcode on her cheek was partially scrapped.

As she found out later the automated chambers were in still in beta-testing and could easily get confused with pre-existing tattoos. The project eventually dismissed the whole process and even offered active participants to remove the barcodes completely.

But she liked that little bit of of individuality, standing out in a crowd of fellow participants. So scientists, engineers and some say even the computer systems of the facility still know who you mean if you speak of the Girl with the Scrapped Barcode Tattoo.

Combing through the data backup of the dismissed Automated Participant Analysis Chambers the engineers stumbled atop the image artifact that triggered the most notorious (and emberassing) failure of the APAC machines.

"Does anyone know if the Girl with the Scrapped Barcode tattoo is still with the project?" asked one of the engineers.

The other engineers shrugged. If everything went smoothly, they are supposed to only have minimal contact with the participants.

"Wait, yeah - just the other day I adjusted one of those energy extraction suits for her." said the specialist that supervised the backup procedure.

"Wow, she is with the PSI enhancement program." answered the engineer. "Better not get on her bad side, then."

On the other end of the campus the the Girl with the Scrapped Barcode Tattoo prepared for another session. She asked one of the attendant scientists if it was alright that her skin had grown back over her umbilical port. It was one of the first experiments she took part in and she kind of missed just hooking up some nutrition when she didn't feel like visiting the lunchroom. The scientist quickly scanned the barcode and told her not to worry, it was only meant for the hypersleep studies anyway and the tests already switched to different access channels.

This made the Girl with the Scrapped Barcode Tattoo wonder even more. What could possibly be a more elegant way to support a body with artificial food? Well, there was a good chance she would find out sooner or later.

The Girl with the Scrapped Barcode Tattoo regained consciousness in one of the countless anonymous lab rooms of the project.

Through the haze of the chemical imbalance in her blood she remembered that she was scheduled for the energy extraction suit experiment tonight. At least she didn't have to be naked for this one.

After the engineers undressed her, the Girl with the Scrapped Barcode Tattoo waited for them to return with the experimental suit.

She looked into one of the many surveillence cameras in the room and covered up her breasts. No incentive for anyone watching to drag this out any longer than necessary.

The tight black suit concealed the array of wires and plugs on her skin. Nonetheless she could feel the technology on and inside of her coming to life.

She concentrated on the fine cocoon of dark energy gradually becoming visible to her senses and wondered. How much of this marvel, summoning power out of the blue, came from her implants and how much came of the latent powers awakening in her mind?

Another day, another experimental setup. The Girl with the Scrapped Barcode Tattoo tried to make sense of the array of connected glowing dots that she was supposed to place on her body. "A little assistance maybe?"

She carefully opened the semitransparent fabric so one of the scientists could help her fix the array of wiring.

"So, what is this test anyway? Is it the coat, the umbrella or are the lights special somehow?"

The scientist told her that she was going to actually test-drive these materials in the exclusion zone a few hundred meters beyond the campus limits. No simulated environment in a weather-controlled test chamber, no digital facsimile projected into her grey matter, the real surface.

“Let's hope you have a plan to get me back in quickly if this does not work out. No degree of accelerated healing is going to have a chance when I get caught in an acid rainstorm." 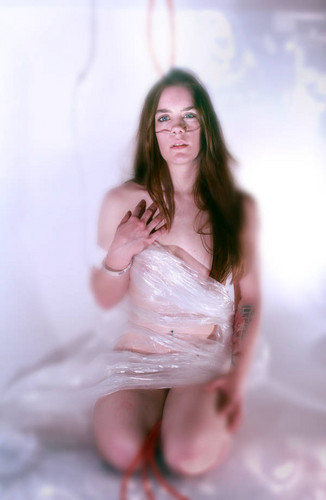 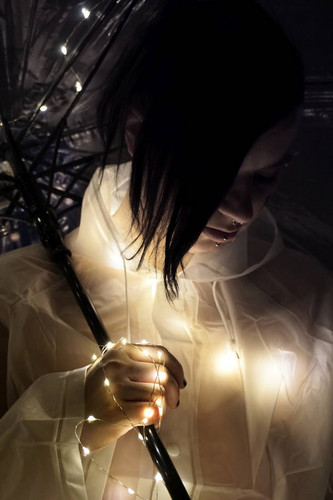